Havana is such a unique and vibrant city – the heart and capital of Cuba. Even though it is the smallest of the Cuban provinces, it has over 2 million people living there. The complexity of Cuban history is still visible in the city and in the minds of the locals. You can get glimpses about the history if visiting the museums and cultural places. The city has a lot to offer and places to explore and you are guaranteed to experience a unique trip. The colors, music and buildings hold an old-time glamour and shabby yet romantic vibe.

Havana has something to offer to everyone from historical sites to nature escapes. In fact, the city was nominated as the world’s seven most wonderful cities in 2014 in the New7Wonders Cities Contest. That is quite something and I can agree on that completely. The history of Cuba dates back to 1519 when the Spanish conquered the island. And what makes Havana such a unique place is that they have had influences from Spain, Africa and the USA. Most of the changes happened between the 1930s and 1950s when they were under American influence. The Revolution in 1959, which was led by Fidel Castro Ruz, a lot of transformations were made, mainly to education, public health and official buildings. And when talking about the Cuban revolution, Che Guevara cannot be left mentioned. Che Guevara met the Cuban brothers Fidel and Raúl and joined Fidel Castro’s movement in 1956 in the attempt to overthrow the dictatorship of Fulgencio Batista. Che Guevara became an idol and he still remains an inspiration for revolutionary action.

There are two currencies in Cuba; the Cuban Peso (CUP) and The Cuban Convertible Peso (CUC). The Cuban Peso is the national currency, so be careful when receiving money back since the CUC holds no value. There are ATM’s to withdraw money from and hotels change other currencies as well. Note that the ATM’s don’t accept cards issued in the USA.

How to go around

The best way to go around in the city is on foot and by car or a taxi. Some hotels offer a free shuttle bus if your hotel is located outside Habana Vieja. Otherwise, you can grab a taxi when moving long distances. We took the taxi to get to the beach – they offer a fixed price to take you there for a day and also back to the city.

The old town of Havana ‘the Habana Vieja’ is the best place to explore the culture. You can stroll around the streets, admire the old buildings and sit for a Cuba Libre. The old town can’t be accessed by car so the best way to experience it is by foot. The colorful pastel buildings are just so gorgeous! You can even get the chance to see the locals performing shows and dancing on the streets. Wherever you go to, you are gonna see lively people and a happy atmosphere. You can easily spend the entire day just exploring different places in the old town.

If you want to experience the newer side of the city and some of the most important sites, you can head to National Capitol – El Capitolio. Between this government building and the Statue of José Martin on Paseo de Marti, you can get a ride in one of the iconic old cars. They offer tours in the new town showing you the most important places in the city, including the Revolution Square and the Hotel Nacional de Cuba – National Hotel that also use to be a private casino and gambling place for a selected group of people. You can take a tour from 1 hour up to two hours and they will stop and you can take pictures along the way. Another option is to rent your own car and see all of these places on your own and go outside the city too. Some hotels offer rental cars but you should check the rates also in advance from different places to compare options.

You can’t talk about Havana without mentioning rum and cigar! The home of Cuban cigars and the rum Havana Club, Havana offers different places to get the local goodies. There is a Havana Club museum with a little shop included and if you are interested in seeing the distilling process of the rum. They offer guided tours, rum and cigar tastings and cocktail workshops. Other places to buy cigars and also rums are Partagas Cigar Factory and Romeo Y Julieta Cigar Factory.

We are food lovers, so we wanted to have the most authentic Cuban food experience. I got recommendations from a friend and we went to see some of the places. Now, there are a lot of options to have a drink and food in. Some of the places are owned and regulated by the government so we wanted to avoid these places to support the locals. There are also ‘Paladares’ – restaurants that are run by locals. They serve “home-cooked meals” and they are closest to what you can have to taste the real Cuban food as a tourist. There are lots of bars in the old town including La Bodeguita del Medio which opened its doors in 1942 and it is said to be the birthplace of Mojito. It became famous because of the people visiting the bar including Nat King Cole and Ernest Hemingway. It’s a good place to go and see and experience some live music too, although Cubans think that the place too touristy and the cocktails being overpriced.

Near La Bodeguita del Medio, in front of the Colonial Museum – Museo de Arte Colonial (also a good place to visit) there are some of these Paladares. They are located in front of the square on the corner of San Ignacio. There are several restaurants on the street – all of them owned by locals. They give you two cocktails included with one meal, ask for recommendations. It is a bit more expensive than the other Paladares because it’s located in the historical center –  on Plaza de la Catedral but still cheaper than the government restaurants. But the service is good, the workers are nice and the food authentic!

A good place to have dinner is called La Paila. Here we had one of the best meals during our stay. The food was absolutely delicious and the atmosphere lovely and original. You can choose to sit either outside in a small garden or inside. The restaurant is a bit far from the center but absolutely worth visiting. It is walking distance away from Callejon de Hamel – a narrow street filled with local colorful art and sculptures by Cuban artist Salvador Gonzáles Escalona.

There are a few places to go in the evening. There is a lounge bar called El Cocinero. They have a rooftop bar and also serve food. The food was very tasty, but a bit more expensive. Nest to El Cocinero there is a night club called Fabrica de Arte – ‘FAC’. We actually didn’t go here but I heard that it’s a good place for a night out. At least the lines outside we long on Saturday! Near El Cocinero there is an outdoor salsa bar called 1830 with live music. Also, the old town is filled with bars and good music.

Near Havana, there are also beautiful beaches around reached by car. Just about 25 minutes drive away you feel the Caribbean warm breeze and turquoise waters. You can also catch a bus there from the city center and it takes about 45 minutes. Rent a beach chair from the beach for just a couple of pesos and enjoy the rum coconuts! A word of warning though – choose a day that is not windy. When you reach the beach on a windy day, it can be a very unpleasant experience since the wind there is not any kind of mild – you will be washing sand out of your eyeballs for the rest of the day. The best beaches to go to are Santa Maria del Mar, Boca Ciega, Guanabo, and Brisas del Mar. The north coast has kilometers of beauty to be admired!

Even though Cuba today is open for tourists to explore, the city still has some restrictions when it comes to everyday commodities. The main items available are local products like rum and cigars – from which the country is also known for world-wide. But what makes Havana so charming are the people and the environment itself. Cubans are unique and more than welcoming, the city’s appeal comes from the charisma and liveliness of the locals – a mix of different cultures melted in one. The true spirit of Cuba feels almost touchable and is still alive today. 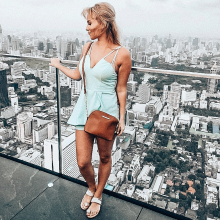